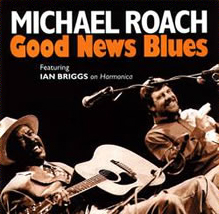 NOW AVAILABLE! FIND IT ON:

This CD features Michael in the same traditional setting as his previous recordings. The album contains 12 tracks that was produced and arranged to fit within his rhythmic fingerpicking guitar style. Michael wrote 6 tracks and of special interest are 2 tracks that are poems, one from Otis Williams who the title track is a tribute and the other by the historical black writer and poet Paul Lawrence Dunbar. The remaining tracks are versions of songs by Big Bill Broonzy, Bumble Bee Slim and public domain material such as “Jesus Gonna Make Up My Dying Bed”.